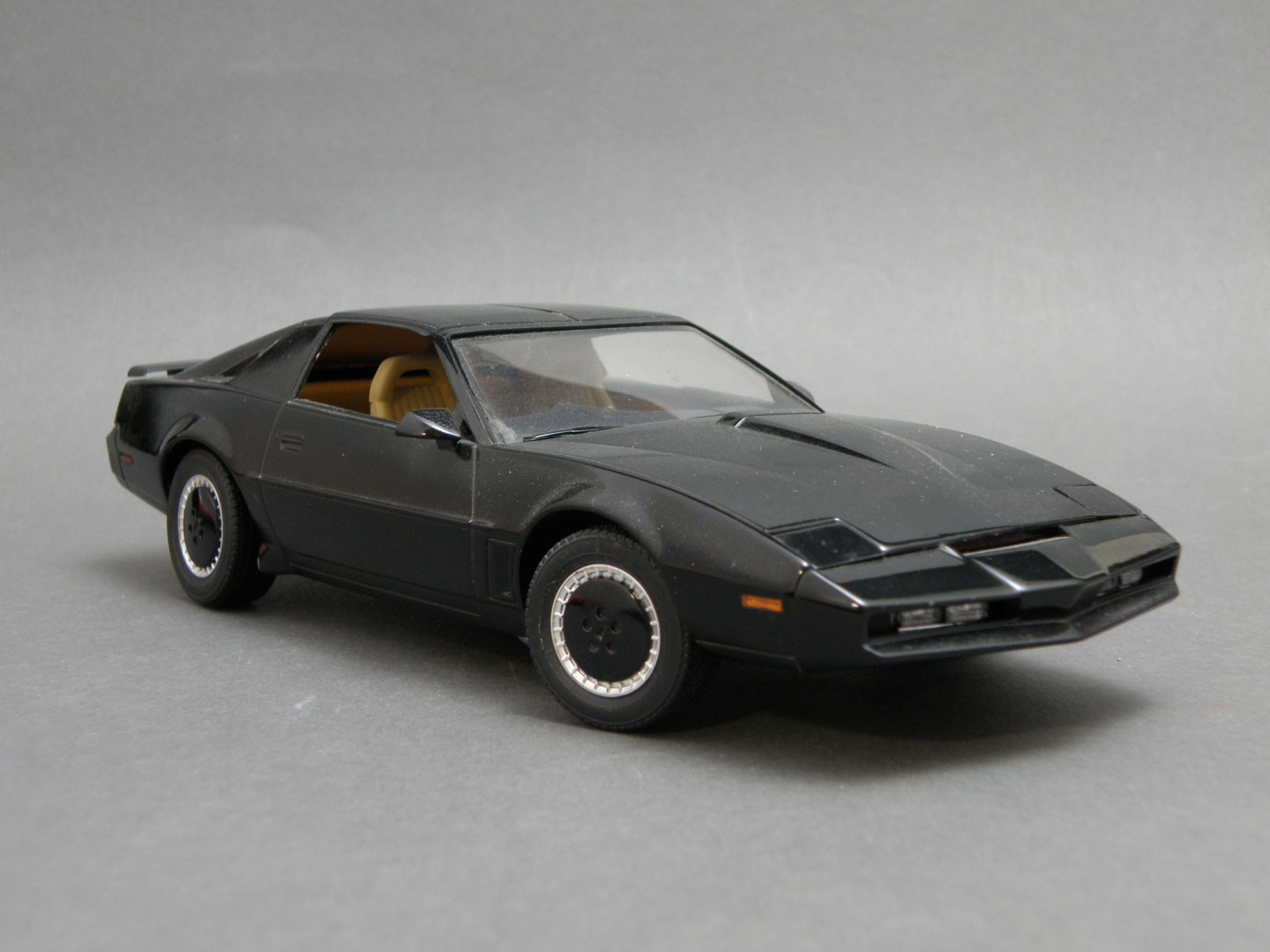 Dominik Weitzer
Thanks! much appreciated.
Christian, thats Right. i like the proportions also

Chaz Gordon
You can get an 8 light chaser circuit on ebay for £13, just add 8 rectangular red LEDs. You'll have to put the chaser circuit in the trunk though, it's quite large. It's got several programs including a double led strobe mode that also works for police and recovery truck light bars.
25. June 2020, 18:11

Potchip
These kits get re-leased every couple of years. Last round it was the K.A.R.R. kit with the orange front scanner, and I think it was available as recent as mid/late last year. Just have to be patient and check the various Japanese online hobby stores for pre-order.
26. June 2020, 04:45

Dominik Weitzer
Interesting!
The new issues...i can't find a review whats in the box in different offers. So it could be possible, that they downgrated the electronic scanner?
26. June 2020, 07:06

Chaz Gordon
Christian, not sure if we are allowed to post direct ebay links, but search for "8 LED Chaser - Strobe & Flash Effects" It's the usual chinese sellers so should be available anywhere. You'd need to source the led's separately as it comes with round ones - search for "Rectangular 3 x 2mm Through Hole LED"
26. June 2020, 07:22

Starbase101
I've got nearly all the Aoshima Knight Rider kits - only two have eluded me thus far (with one of them currently on order), but it's okay because I've got their non-scanner equivalents with multiple of the separate scanner lights. I can tell you the parts trees are identical between the standard kits and the "with LED front scanner light" editions. The kits having a scanner light are the same electronics that are sold separately. I don't know how the Chinese eBay ones perform, but the Aoshima ones have the proper power-on effect of all 8 lights coming on for a moment and then starting the chaser sequence (but incorrectly starting at the right end instead of properly from the left end) and feature a "comet tail" effect (similar a custom circuit I designed for my MPC kits and Cylon Centurian). However, a problem with the Aoshima electronics is K.A.R.R.'s LEDs are orange instead of a more-correct yellow, so the LEDs need to be replaced for a more-accurate K.A.R.R. build. The red K.I.T.T. scanners are fine as they are, except both have the LEDs soldered directly to the board so you forfeit any plans for an engine without surgery on the electronics. Aoshima's two on-board lithium/ion batteries makes it too thick to fit between the chassis and interior tub or under the rear trunk area, so if you opt to not place it under the hood as designed, you'll then be hiding it outside the car in a display base. My personal design uses tiny SMD components on a board sized to fit at the back of the car with thin wires (LEDs don't need much current) running under the interior tub and front fenders to a scanner, like the larger 1:18 heavy die-cast JoyRide car. I will also say that other chaser boards I've seen from TenaControls and various YouTube builds do not feature the start-up effect and "comet tail", and some have a noticeable "gap" in the chaser sequence where all 8 lights are off for a moment as the sequencing "resets" for the next pass. This causes the scanner to "blink" at the end of each complete loop, appearing as if the first LED was missing or burnt out. Most people probably wouldn't notice or care, but it's an issue for a Knight Rider fan like myself. My circuit and the Aoshima ones are not like this, having the light properly wrap-around at both ends on every pass. So, yes - the Aoshima electronics, especially the red K.I.T.T. one, are worth getting if you can find them.
26. June 2020, 13:00

Spanjaard
There are some kits frim Bulgaria that seem quite ok. I got one, but have not yet tried it. Ebay of course
About the kits, some of them have the les included (marked in the box) others do not. Bur the rest, as star ase101 said, is the same. Getting original led kit today is around 100USD on ebay....
26. June 2020, 17:54

Starbase101
Many of the eBay sets do not have the correct number of lights for a Knight Rider build, so be sure to shop for one having 8 lights. I looked at the Bulgaria one and although it's got 8 lights, the board is huge, doesn't feature the power-on cycle, and doesn't have the fading "comet tail" effect. Perhaps fine for casual builders, but not fully-accurate for a Knight Industries vehicle.
26. June 2020, 18:10

Starbase101
Spanjaard, not necessarily - maybe the board will fit under the hood (perhaps tilt it if it's too long). I'm just going off eBay photos and videos which has the Bulgarian board looking long relative to a car's engine area. As for the lighting effects, they're really only desirable if you absolutely want it to look exactly like the TV show.
26. June 2020, 22:02

Chaz Gordon
Can't really see from anyone's albums, but I'd guess there is a fuel tank under the car somewhere, would be an ideal place to stash a PCB, and usually adaptable for battery change and a switch too.
26. June 2020, 22:09

Starbase101
There is enough room at the back under the trunk area for a PCB if designed for such. The problem is a lot of circuit designers don't use SMD components or make boards small enough to fit in a an area like the back of K.I.T.T.
26. June 2020, 22:18

Spanjaard
@Starbase101, fitting the board can always be done, worse case, in a base, with just cables getting to the right place... but if the board does not do the real effect... i will need to explore other options
26. June 2020, 22:18

Starbase101
Spanjaard, the one I saw, which I'm presuming is the same since it's the only one on eBay from Bulgaria, has 15 programmed functions that are demo'd in a video on the item description and none of them are an exact match to the "Larson" circuit on the studio hero car. When I watched the demo video today I remembered seeing it quite a while back when I was just browsing around to see what other products were "out there". Do a search for a "Larson Scanner" (coined after Glen Larson, creator of the show). You can find assembled products, DIY kits, and circuit diagrams online. I've got various electronics manuals from The Knight Project (created for building full-size replica cars) that has electrical schematics and templates for all the dash components and scanner light (all designed to run off a 12V car battery, but easily adaptable to smaller batteries), but I customized my own scanner circuit for digitally recreating the effects seen on the studio car. Out of all the over-the-counter scanner products I've seen, I can say as a Knight Rider fan that Aoshima got it the closest.
26. June 2020, 22:41

Spanjaard
first one could be perfect, but i have not managed to find the specs 🙁

Starbase101
The first one has a bad start-up sequence. Instead of all 8 lights ramping up together and then fading out prior to the first cycle, it does a half-cycle from left to right and then starts the chase circuit - from the left again. It also has 2-3 "bright" lights instead of just one, and incorrectly has both a leading and trailing partial light. Again, adequate for a lot of people, not perfect enough for myself.

The second is one of those strictly-digital versions where only one LED is lit up at any give time. There really should be 3-4 progressively diminishing lights behind the "lead" light. This one also has a major lag between each cycle with no lights on at all.

The third one is the Aoshima boards, comparing the red K.I.T.T. light with the K.A.R.R. yellow light. (This video bugs me - I've watched it many times before. I don't know if it's camera washout or what, but the K.A.R.R. board is actually YELLOW in the video instead of the cruddy orange of LED Front Scanner Unit (Aoshima 041291, 1:24) that I've got. I want to get the season three K.A.R.R. kit that has a scanner included to see if it's actually yellow or the same as the separate scanner. It annoys me that mine lights up orange, and it's yellow in the video. To my knowledge, Aoshima made only red and "orange" scanners.) Anyway, you'll notice at 00:15 how it's got that nice power-up mode seen in the show, but then it starts scanning from the right instead of from the left. (Something that may not really matter after a few cycles have run by, but I'm a stickler for details like that.)

I've browsed around once in awhile to see what other people have done and how my design compares and I still prefer mine best, with Aoshima's coming in at second place.

So sorry about getting this thread off-topic. We really should be talking about Dominik's project!
26. June 2020, 23:08

Dominik Weitzer
I'm fine with that! That are really interesting speeches. really interesting.
for the photos i started the LED's and the first glow up all and start scanning....thought it was on the passenger side. Uh...., have to look again.
i thought, that all of the Aoshima Kits have the same working scanner.
Thanks for the informations! Something learned - and that counts😉

Starbase101
Dominik, the passenger side is where the scanning is supposed to start from, after all 8 ramp up then back down. I suspect maybe the boards get installed "upside down" in the model (opposite of what's shown in the YouTube comparison video) and then the Aoshima electronics would indeed be 100% correct with the power-up and start position.
27. June 2020, 23:38

Starbase101
I've now got the Aoshima K.A.R.R. kit with LED scanner and it is indeed YELLOW! So, it would seem it's just the sold-separately LED scanners that are red (041284) or orange (041291). Why orange? Who knows - there was never an orange scanner in the Knight Rider show. But I thought it was worth mentioning here that the LED scanner that comes included with the K.A.R.R. kit is the proper yellow color.
6. July 2020, 21:21

Starbase101
Expensive is a relative term. I'd give it away free if it meant having my missing cat returned safely. She's mysteriously vanished. Out of all the various animals on this planet, why'd the aliens have to grab her?!?
6. July 2020, 22:42

Starbase101
Especially when an "expensive" breed with a personality I've never seen in a cat from over 50 years of having feline companions.
6. July 2020, 23:20

Christian W
Hope it's coming back safely! My cat was missing nearly two weeks. A neighbour told me that he is out in a field of them Hunting mice. I went there and he came back home with me. This wee I didn't see him again for 4 days. This Little bastard😉 But this morning I saw him again in the field where I found im last time. I know it is his Hunting area and when he is missing, I go there to look after him.
Hopefully your cat is the same vagabond😉
7. July 2020, 04:32

Tim Heimer
Dominik I'm going to be doing this kit soon, I was wondering if you were able to get the scanner light system and get it installed?
5. August 2020, 04:27